What "Learning From Failure" Really Teaches Us 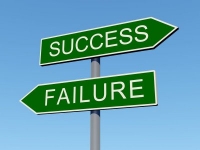 It is often said that failure can promote valuable learning. Unfortunately, professionals are rarely given the opportunity to fail repeatedly. So, what does this teach us?

Understanding customer rationale is a necessary precursor to addressing their objections.

While it can sometimes be challenging to uncover rationale, other times it's obvious: they simply don't want to fail (in the same area) twice.

There is a lot written about valuable lessons that can be learned from failure. That running smart inexpensive experiments which fail yields insight and understanding that subsequently contributes to increased success outcomes. That's fine, and is probably true, but who among us really wants to be known as the person who ran the failed experiment?

Whatever else that one may learn from failure, it is safe to say that it is not typically an effective resume builder.  As a result, it can cause many corporate employees to become risk-averse.  I've learned to accept risk avoidance as a strong behavioral motivator for some business professionals.  Risk aversion can create significant and challenging barriers in the selling process.  Still, these concerns can sometimes be managed by de-risking a proposition.  How to do this?  Recount the success enjoyed by others who expressed similar concerns, but who decided to proceed anyway.  Referrals and testimonials can be a highly effective means of building confidence among risk averse professionals.

Do you agree? I'd welcome your thoughts.